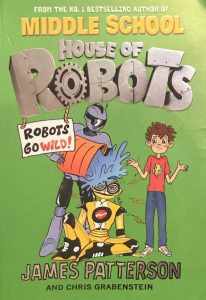 Sammy is a normal boy, and like lots of boys he has a brother. But Sammy’s brother is no ordinary boy. He is a robot called E. Sammy’s mum is a robotics expert who has made lots of robots that are super advanced. Sammy’s house is filled with them! If his Mum ever needs something done, instead of learning how to do it, she will make a robot to do it for her.

Sammy’s dad is a famous graphic novel writer and illustrator who is known for his great work. Finally, there is Sammy’s sister, who is a real human. She doesn’t go to school, not because she doesn’t want to (she probably wants to go to school more than any kid ever), it’s because she can’t. She has a disease called SCID. That means that even a small exposure to germs can lead to having to go to hospital due to her weakened immune system. So E has to go to school for her. Even though E is advanced AI (artificial intelligence), when Maddie, Sammy’s sister, starts to control E, he becomes the eyes and ears for her in the classroom.

When a new robot starts going to the same school as Sammy, he gets suspicious. Then E starts to lose control and go absolutely crazy, right after the new robot touches him. This
raises Sammy’s suspicion even more. Sammy thinks something is wrong with that new robot, and he must search to find the secrets surrounding it.

Maddie, because even though she is stuck in her room, she refuses to give up hope for someone to find a cure for her disease.

When the going gets tough, the tough get going.

An easy(ish) to read mystery/adventure book with some humour and inspirational parts. Recommended for medium-skilled readers who like adventure.

Age: Depends on maturity and skill of reading. For me, 9+