The Famous Five - Five on a Treasure Island 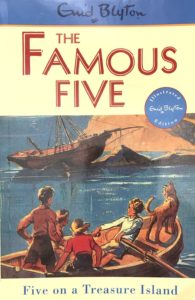 'The Famous Five' is Enid Blyton's most popular series based on the characters Julian, Dick and Anne, George and Timmy the dog. The first book, Five On A Treasure Island was written in 1942 and has been republished many times.

When Julian, Dick and Anne have to go to their Uncle Quentin's house, Kirrin Cottage, they meet a tomboy called George (her real name is Georgina but she refuses to answer to that) and her dog Timothy.

They soon gain the trust of George and Timmy, and she takes them to her private island - somewhere she has never allowed anyone else to go. Soon after arriving on Kirrin Island, they discover a shipwreck, washed up by the waves in a terrible storm.

What they find next will lead them on the trail of an exciting adventure!

I enjoyed reading about Timothy the dog, (also lovingly called, Timmy) because he is easily excitable, playful and always seems to know what people are saying.

You can find friends in the most unlikely places; you just have to look.

I would recommend this book for people who like humourous mystery stories.